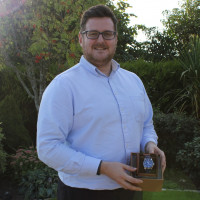 "My overall experience with the Watchlotto group has been brilliant and I am still getting over the shock of winning the watch as, like previous winners, I saw the advert through social media and being an avid fan of watches I couldn't resist playing in the September Draw. So I put in 20 entries and did not think anything of it. Still to this day I never thought in a million years that I would win a watch I have been keeping my eye on for awhile. It was even more of a shock as I forgot that I had entered the competition!

I was sat at my desk when I received a call from a mobile number I didn't have saved. To begin with I thought it was a PPI or an Accident Claim company phoning however thankfully it was Southend Football Club telling me I was September's Watchlotto winner.

Despite being told I had won I was still sceptical... that was until Harrison FaceTimed me to tell me personally I had won a Breitling Superocean Heritage II and he even showed me the watch that I was going to be getting. Needless to say that was a very happy Friday for me and all scepticism was gone!!

Harrison and the team personally flew up for the day to Aberdeen from London to hand deliver the watch to me. The watch looked 100 times better in the flesh and feels fantastic on the wrist. It is definitely an eye-catching watch as numerous, family, friends and colleagues have commented on it (while also telling me how incredibly lucky I am!)

A lot of people I spoke to had doubts about it, saying Watchlotto is a scam, you will be ripped off etc. however now that I have the watch they are the ones downloading the app and playing in next month's competition! Not only is the watch the real deal but so is Watchlotto. Speaking with Harrison and the team has been easy and straight forward . The watch is perfect and the hand delivery by Harrison himself is also another element that makes Watchlotto excellent to deal with!

Thank you Watchlotto, Harrison and Team for the watch and good luck to everyone in the upcoming competition!"

Equipped with an ultra-hard and scratchproof high-tech ceramic bezel, this loyal companion of the finest adventures perpetuates the unique and timeless style of the legendary 1957 model.

It is water-resistant to 200m (660 ft) and the case houses an officially chronometer-certified self-winding manufacture caliber.

learn more about the watchlotto judges

the next watchlotto competition is now live!