TAG HEUER INTRODUCES A NEW MONACO, NOW WITH A BRACELET 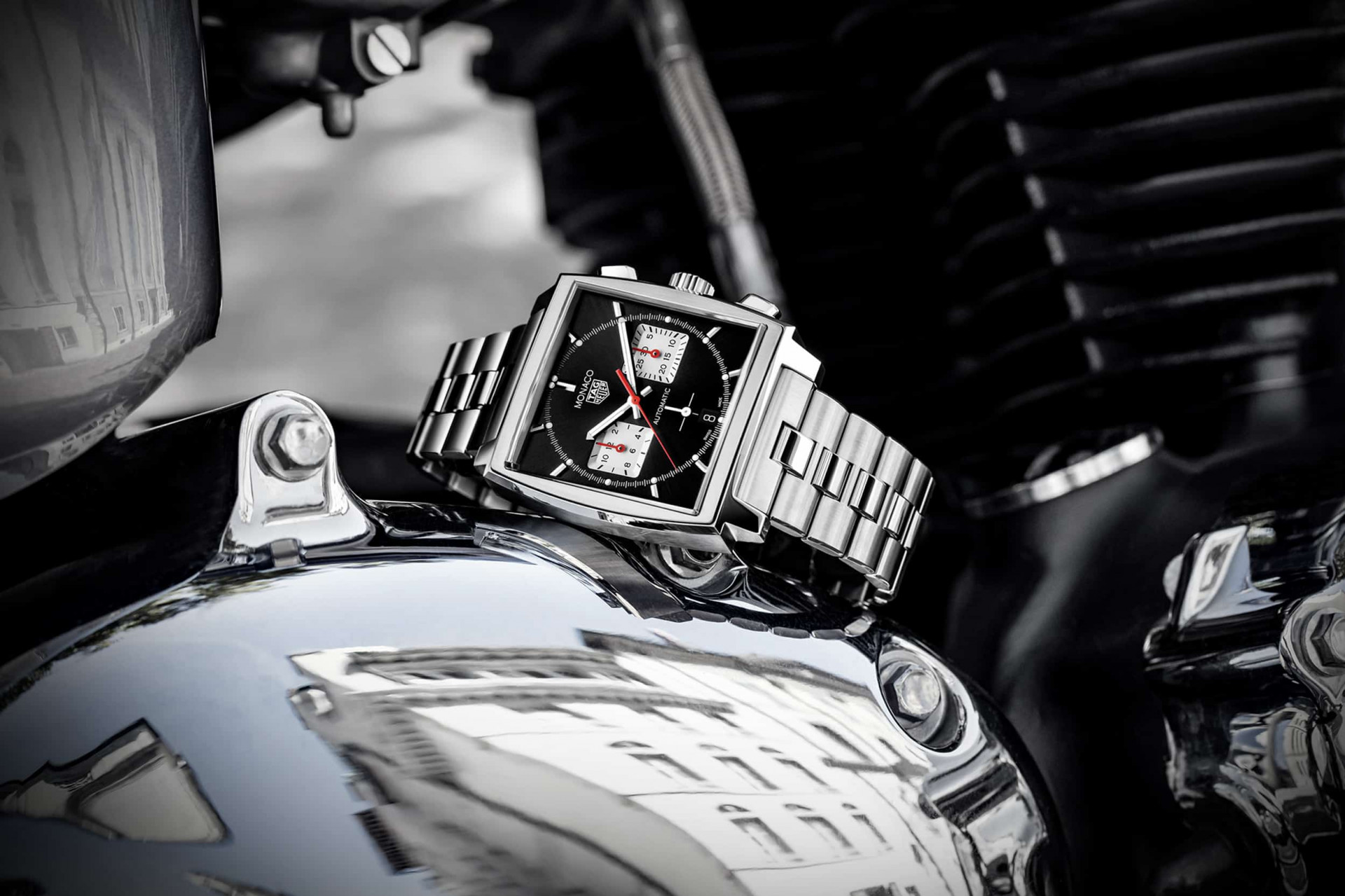 We’ve talked a lot this year about TAG Heuer’s consistent stream of new Carreras that have come to market to celebrate the brand’s 160th anniversary. But TAG, more than any other brand, has a fleet of iconic chronographs in their stable that they return to again and again, making changes here and there, both small and large. The Monaco is more of a cult favorite than the Carrera – it’s a tougher sell with its square case. But among enthusiasts of both watches and racing, it has a strong following, and new variants are always worth exploring. Today, TAG Heuer announced the latest Monaco, a year after this particular watch celebrated its own anniversary with a yearlong celebration of limited edition releases. These new watches can be seen as something of a “next generation” Monaco that is the current standard in the catalog, and they feature some updates that are completely contemporary while also drawing on the past (no surprises there). Let’s take a closer look.

There are two dial variants here, both with brushed sunray effects. The more modern and contemporary to my eye is the black dial with silver subdials. The blue version seems to draw more on the Monaco’s colorful past, and has a playful and sporty feel, where the black feels a little more sober. Each variant features the same set of red accents on the handset, and has the same running seconds arrangement as the recently released Carrera, with a simple crosshair in lieu of an actual subdial. As it does on the Carrera (and this limited edition Monaco from last year), this has the effect of focusing the eye on the chronograph elements, and makes what is actually a three register watch appear as having only two, which equates to a cleaner look. The case is 39mm with 100 meters of water resistance, and of course has the imposing, square shape that we’ve seen in the Monaco from its inception.

The dial, it’s often said, is what sells a watch, and these Monaco dials are nice enough. But the bigger news here, at least for Heuer fans, is perhaps the inclusion of a bracelet on these new Monacos. This is a watch that throughout its history has been primarily seen on straps, often of the racing or rally variety, and it’s a little strange at first to lay eyes on this well known case mounted to a stainless steel bracelet. Indeed, according to TAG Heuer, it’s been 20 years since the last time a Monaco was available on a bracelet direct from the factory. It shouldn’t be surprising, though, that TAG went in this direction: we’re all keenly aware of the importance of stainless steel sports watches on bracelets in the current market, and the Monaco, while not a flagship product for TAG, is still visible enough that it would be silly to not give customers an option.

The Monaco bracelet seems to be fashioned in a vintage inspired style with a generous taper from the lugs to the butterfly clasp. It has the initial appearance of a three-link design with a small polished center link connecting two brushed outer links. On closer inspection, however, those two outer links are actually connected by a thin bar, creating what in practice is actually an H-link design, similar in theory to a Sinn bracelet, but with a much thinner connecting piece. Overall it’s attractive and straddles the line between sporty and refined in a way that you’d expect for a watch at this price point ($6,750). It’s a luxury item, no doubt, but has a clear sporting heritage and is almost certainly made to a standard that will allow it to stand up to regular daily wear without an issue. It should be noted that the black dialed Monaco is also available on a leather strap, while the blue variant is only available on a bracelet at launch.

The Monaco runs on the Heuer 02 Automatic movement, the same modern in-house chronograph caliber that we’ve seen in this year’s succession of Carreras. As we’ve pointed out whenever we get the chance, this is a solid, technologically up-to-speed caliber that is real competition for similar in-house calibers from Rolex, Zenith, and others. Compared to watches from those brands, the features stack up (column wheel, vertical clutch, 80 hour power reserve) and can be had in watches that are often less expensive than those you might be cross shopping.

The black dialed versions of the Monaco, on a bracelet or leather strap, are available this month, with the blue dialed Monaco following in January 2021. TAG Heuer

Do you want to own one yourself? Win a brand new Tag Heuer for £2.24 by clicking here - Good luck!